Leading Figures: Deans and Directors of the School

In a history spanning forty years, George Mason University’s Carter School for Peace and Conflict Resolution has been most fortunate in its choice of leaders.

Of the eleven people who have held the position of dean or director at the Carter School for Peace and Conflict Resolution (formerly the School for Conflict Analysis and Resolution), some made their reputations primarily as scholars and teachers, some as practitioners, and some as administrators. But all managed to use their existing abilities and develop new skills in ways conducive to the growth and development of the School, placing it at the cutting edge of peace and conflict studies.

The first leader of this community was the remarkable Bryant Wedge, a charismatic Yale psychiatrist and social scholar who pioneered the use of psychoanalytic concepts to interpret the behavior of political leaders. With his colleague and successor, former Foreign Service Officer Henry C. Barringer, Wedge helped create the original Center for Conflict Resolution at George Mason in 1981. At the same time, with the support of future Carter School professor James H. Laue, the two innovators led the fight for a National Peace Academy, which eventuated several years later in the creation of the United States Institute of Peace. 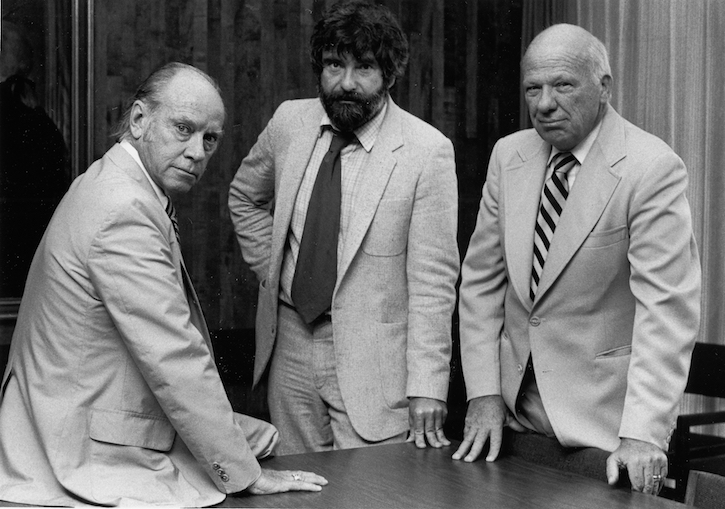 George Mason sociologist Joseph Scimecca succeeded to the directorship in 1986. Under his leadership, a group consisting of visiting scholar John Burton, conflict specialist Dennis Sandole, anthropologist Kevin Avruch, and others succeeded in creating and securing approval for the nation’s first doctoral program in Conflict Analysis and Resolution. They also won a major, multi-year institutional grant from the James and Flora Hewlett Foundation and, with the support of Edwin and Helen Lynch, established the first chaired professorship in Conflict Analysis and Resolution.

Richard Rubenstein, currently University Professor at the Carter School, served as director from 1989 to 1991. As a result of his efforts, the Center for Conflict Analysis and Resolution became a freestanding Institute reporting directly to the George Mason University Provost. During his term of office, the Vernon M. and Minnie I. Lynch Lecture Series was initiated, the Carter School convened the nation’s first major conference on the News Media and Conflict Resolution, and a workshop conducted at Airlie House brought together key players in the Northern Ireland conflict. In addition, John Burton’s and Frank Dukes’s four-volume Conflict series was published by Macmillan/St. Martin’s Press with participation by other faculty members.

Rubenstein’s successor, Christopher Mitchell (1991–94), initiated the process by which the School would become a Commonwealth of Virginia Center of Excellence, as well as the leading institutional home for the “Zones of Peace” research initiative. Dr. Mitchell strengthened the Carter School's commitment to reflective practice and, with Professors Daniel Druckman and Wallace Warfield, organized major conferences on negotiation before becoming the first Drucie French Cumbie Chair of Conflict Resolution.

Kevin Clements, a New Zealander and secretary-general of the International Peace Research Association, became the Carter School's director in 1994 and served until 1997. His administration saw the first significant jump in graduate student enrollment and completed the process by which the School became a Commonwealth Center of Excellence. Rapid growth continued during the directorship of Sandra Cheldelin (1997–2000), later holder of the Vernon M. and Minnie I. Lynch Chair of Conflict Resolution, who used her considerable organizational skills to improve relations among faculty, staff, and students within the School and within the University. In addition to raising significant funds for research and practice, Dr. Cheldelin also began the work with Daniel Druckman and Larissa Fast that would later produce the Carter School's first all-faculty textbook, Conflict: From Analysis to Intervention, now in its second edition. 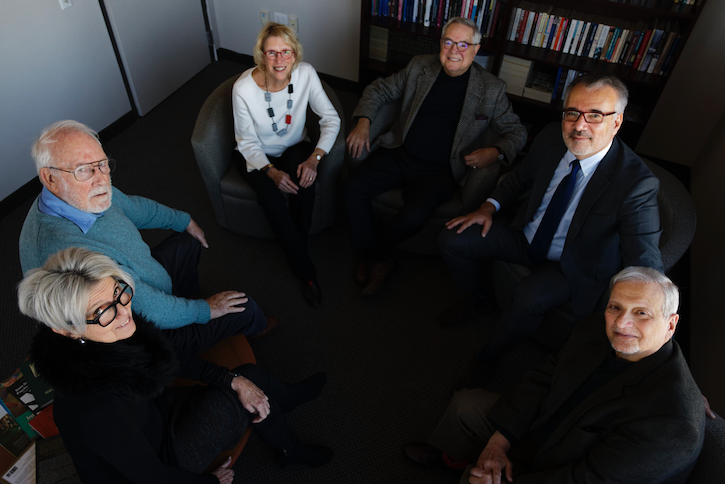 Sara Cobb, the Carter School's longest-serving director, served from 2000 until 2008 and oversaw the largest burst of growth in the institution’s history. Prior to coming to the Carter School, she served as director of the Fielding Institute in Santa Barbara, California, and as executive director of the Harvard Negotiation Project. Under her leadership, the beautiful property at Point of View in Mason Neck Virginia, left to the School under the will of Edwin and Helen Lynch, was funded and developed into a workable center for meetings and home to graduate fellows. Dr. Cobb helped to create George Mason’s first undergraduate program in Conflict Analysis and Resolution, originally directed by Professor Susan Hirsch, which now boasts several hundred major and minor students and graduates. She instituted administrative reforms that gave the School its first genuinely effective administrative staff, and she actively promoted trends that positioned the School as a “player” in the world of Washington, D.C., without sacrificing its political and intellectual independence.

Andrea Bartoli, the first dean (2008–12) of the new School for Conflict Analysis and Resolution, came to the School in 2006 as Christopher Mitchell’s successor in the Drucie French Cumbie Chair of Conflict Resolution. Dr. Bartoli was already an internationally renowned peacemaker with significant experience in resolving conflicts on four continents. An outstanding expert on genocide prevention, he served as the founding director of Columbia University’s Center for International Conflict Resolution and as the special representative to the UN of the Community of Sant’ Egidio, the world’s leading Roman Catholic peacemaking organization, which he now leads as president. During his tenure in office, Dr. Bartoli oversaw the development of several new research and practice centers that, in the mode of Professor Marc Gopin’s Center for World Religions, Diplomacy, and Conflict Resolution, became foci for intellectual innovation at the Carter School. Professor Sandra Cheldelin directed the Center for the Study of Gender and Conflict, Professor Sara Cobb created the Center for the Study of Narrative and Conflict Resolution, and the Center for Peacemaking Practice was led by Professor Susan Allen.

When Andrea Bartoli left the Carter School to become dean of the School of Diplomacy and International Relations at Seton Hall University, his successor at the School's helm was Kevin Avruch. A long-term member of the Carter School's faculty (Henry Hart Rice Professor of Conflict Resolution and Professor of Anthropology), Dr. Avruch is an internationally acclaimed scholar and teacher known especially for the classic works Culture and Conflict Resolution (1998) and Context and Pretext in Conflict Resolution (2012). Under his deanship, sufficient funds were raised to permit the completion and operation of Point of View, the Carter School's beautiful conference center in Mason Neck, Virginia, as well as a tripling of student scholarships. As dean, he improved the School’s relationship with the University’s central administration, helped grow the Carter School's existing study and practice centers, brought the Mary Hoch Center for Reconciliation to George Mason, and presided over a faculty-led process that revised the School’s bachelor’s and master’s degree curricula.

The current dean of the School, Alpaslan Özerdem, took office in August 2019 after several years of service as the co-founder and co-director of Coventry University’s Centre for Trust, Peace and Social Relations, the largest peace studies centre in the U.K., and as Associate Pro-Vice-Chancellor for Research of that university. An internationally renowned scholar and practitioner of conflict resolution, Dr. Özerdem has over 20 years’ experience doing field research in conflict zones around the world, as well as a rich record of academic research and publication. He is an author or editor of numerous scholarly articles and fourteen books, of which the most recent are The Routledge Handbook of Turkish Politics (2019) and Comparing Peace Processes (2019).

As the dean who has led the School through its transition from the School for Conflict Analysis and Resolution to the Carter School, Dr. Özerdem has declared his intention to further strengthen the School’s research and teaching capacities, improve its outreach to policymakers and the public, and help realize the dream of maintaining an effective, independent center for resolving deep-rooted social and political conflicts. 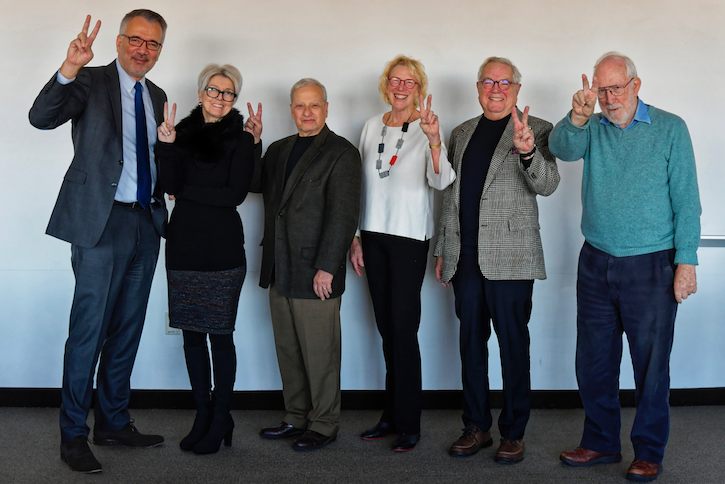