Studying where homelessness and hope intersect 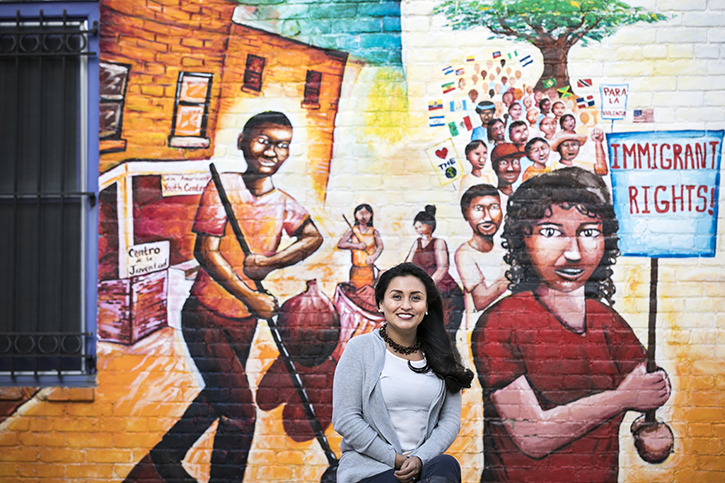 The Columbia Heights neighborhood of Washington, D.C., is a world away from the rainforests of Napo, Ecuador, but Janeth Chorlango is finding that the peacekeeping skills she honed in the jungles of the Amazon basin are equally useful two miles from the White House.

Chorlango, a master’s student at George Mason University’s School for Conflict Analysis and Resolution, came to Mason after working as a conflict analyst for the Ecuadorian government. In the remote Napo province, she led a team that intervened in conflicts involving rural indigenous populations and corporations with oil and mining interests.

In one major case, Chorlango organized cooperation among several institutions to create policies that reduced conflict among large-scale mining companies and smaller-scale local miners. Those policies provided jobs for indigenous miners and divided land so both entities could continue working in peace.

“We aimed to develop a distribution of mining rights that were both environmentally sustainable while supportive of local livelihoods.” she said.

For the past two years, Chorlango has worked as a program manager for the housing department at the nonprofit Latin American Youth Center in Washington, D.C. She manages the program’s policies for transitional housing—currently at a high demand—where she helps place youth with host families, coordinates staffing, maintains budgets and assures the well-being of homeless and runaway youth.

Those they help often arrived in the United States after escaping dangerous circumstances in their home countries, she said.

Her work involves understanding the emotions that lead homeless youth to advance to more stable living conditions and to learn skills to fulfill basic needs. She has surveyed the centers homeless youth and found insights that can be of use by others in the field.

As a research component of her coursework during the summer of 2017, she interviewed homeless youth and found insights that can be of use to others in the field. Her research studied the convergence of homelessness and the perception of hope “as a force [the homeless] can use as a tool to move them in the future.”

Her study caught the eye of one of her professors, Daniel Rothbart, co-director of the Program on Prevention of Mass Violence.

"Janeth shows great promise to become a practitioner-researcher on the topic of homeless youth in urban settings,” he said. “She is perfectly suited to land a long-term position with a social service organization, governmental agency or an advocacy group committed to addressing this societal problem."

“She exemplifies the kind of work we strive to do—bridging theory, research and practice for social change. I think she’ll go far in the field,” she said.

After graduation, Chorlango said, “I would like to apply my new knowledge and skills in conflicts in any place where practitioners can help to promote social justice.”