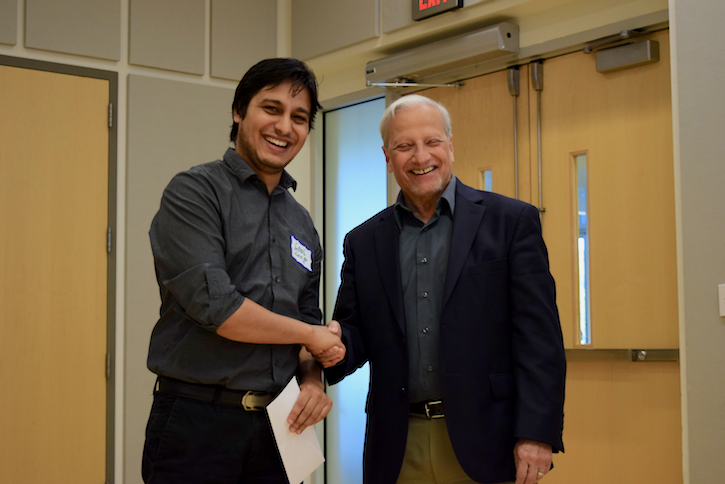 Kuldeep Niraula (left), a doctoral candidate at the Carter School, was presented with a 2018-19 faculty nomination scholarship by then dean Kevin Avruch (right) at the school’s Celebration of Achievements on May 1, 2018. (Photo credit: Ryan M.C. Chiu/Carter School)

Georgia Handforth, a dual degree master’s student in Conflict Analysis and Resolution and Social Work, has a keen appreciation for the essential role that good facilitation plays in conflict resolution.

“I am interested in various facilitation methods and their underlying theories of change, and in work that involves groups, communities, or organizations with diverse interests, lived experiences, and identities represented,” she said.

The Brenda Rubenstein Memorial Scholarship that she received from the Jimmy and Rosalynn Carter School for Peace and Conflict Resolution for the 2018-19 academic year has given her the flexibility to dive deep into this academic interest.

“I work mainly nights and weekends, so being able to choose some classes during times I would otherwise have been working let me explore topics that really interest me but that I might have passed up on for financial reasons,” she said.

Each year, the Carter School provides multiple scholarships to graduate students to allow them to pursue coursework, research, and practice. The awards, which are funded through the generosity of the school's donors, alumni, and partners, are presented every year at a spring celebration honoring the achievements of the Carter School's students.

Christie Jones, a doctoral student at the school who was awarded the James H. Laue Memorial Endowed Scholarship for 2018-19, is focusing her studies on “American race relations as a form of protracted conflict.” The scholarship is awarded to students whose scholarly work represents a continuation of the work of the late Carter School professor James Laue, who was active in the Civil Rights movement.

“I was deeply honored to receive the scholarship,” Jones said, noting that it allowed her to continue her doctoral coursework in the Fall 2018 semester without needing to obtain a loan.

She said her dissertation “will investigate the role of memorials and museums in processing racism and structural violence in the U.S.,” with a specific study on “the National Museum of African American History and Culture (NMAAHC) and the ‘work’ it is doing among African American visitors.” She is interested in pursuing “public history work or museum-related public education” following the completion of her doctorate.

Christie Jones, a doctoral student at the Carter School, was awarded the James H. Laue Memorial Endowed Scholarship for 2018-19 during the school’s Celebration of Achievements on May 1, 2018.

Jones’s dissertation advisor, Leslie Dwyer, an associate professor at S-CAR, says that Jones’s work “is breaking new ground” in the field of conflict analysis and resolution “by attending to how the production and dissemination of histories of racism help shape, as well as constrain, new political possibilities.”

Jones is “a brilliant, committed scholar whose work holds the potential to change how we think about representations of race both inside the academy and in the public domain,” Dwyer said.

As the oldest and largest school for conflict resolution in the world, S-CAR has been educating scholars and practitioners at the cutting edge of the field for more than 30 years. Its graduate scholarships, which range from $500 to $10,000, are awarded in recognition of students who are building upon the foundation laid by luminaries who have made an impact on the field while at S-CAR, including the late Wallace P. Warfield and the late Dennis Sandole.

Warfield, who served as an associate professor at the school, was dedicated to “the philosophy that theory and practice must be a collaborative process.” When he passed away in 2010, his colleagues, friends, and family established a memorial fund in his honor to support students at the intersection of theory and practice.

Warfield’s contributions to S-CAR began in the 1980s, when he was invited to speak to a class taught by Sandole, who was the first dedicated faculty member hired to what was then the Center for Conflict Resolution at Mason. When Sandole passed away in 2018, a memorial fund was created to honor his decades of scholarship not just to the field of conflict analysis and resolution but also to S-CAR.

According to Kevin Avruch, dean of the School for Conflict Analysis and Resolution, the research, teaching, and practice being done by the school’s faculty is rooted in the hope for creating “a more peaceful and less violence-ridden world.”

“[This] is a generational change,” he said. “Our students will make this change happen.”

Those students—many of whom have personal experience with conflict and violence—come to the school with a commitment to bringing about this change. Graduate scholarships help support them in the pursuit of their degrees.

“Donors who make these scholarships possible share in the hope and in the commitment for rising generations to make peaceful change a reality,” Avruch said.

When you make a gift to S-CAR, you'll be supporting the next generation of conflict resolution scholars and practitioners in their efforts to bring about a more peaceful future.

These scholarships aim to ensure that the next generation of S-CAR-educated scholars and practitioners make their mark on the field. Sometimes, that means giving S-CAR students the chance to take advantage of opportunities outside the school.

A 2018-19 faculty nomination scholarship allowed doctoral candidate Kuldeep Niraula to take a class at American University on the role that documentary storytelling plays in social change. Niraula’s dissertation will “explore the role of documentary films in empowering marginalized groups to share their own stories about everyday violence.”

“The scholarship helped me to learn something really valuable for my research,” he said.

Niraula aims to one day open an organization that makes documentary films to bring about social change. He is hopeful that documentary storytelling can help people from marginalized groups share narratives that the mainstream media ignores.

“I expect that eventually the narrative plurality gained through documentary production will contribute to conflict resolution,” he said.

Handforth is also deeply interested in the impact of narrative practice on conflict resolution, not as a documentary storyteller, but as a facilitator.

“I am interested in how issues like systemic privilege and injustice can play through in groups of people who might say they have at least some goals in common,” she said. “In that vein, I'm doing something of a dive into narrative methods as much as I can, because I think they shed light on issues of trust and healing in ways that kind of blow my mind when I think about it too hard.”

For Handforth, who aims to build a career as a facilitator, S-CAR’s opportunities have been integral to realizing her academic interests.

“It's reassuring to be learning from and about people who do work I'm interested in, and who have been doing that work for as long as I've been alive,” she said. “That shows me that it is possible to do, and it's given me a lot to think about in terms of future directions.”