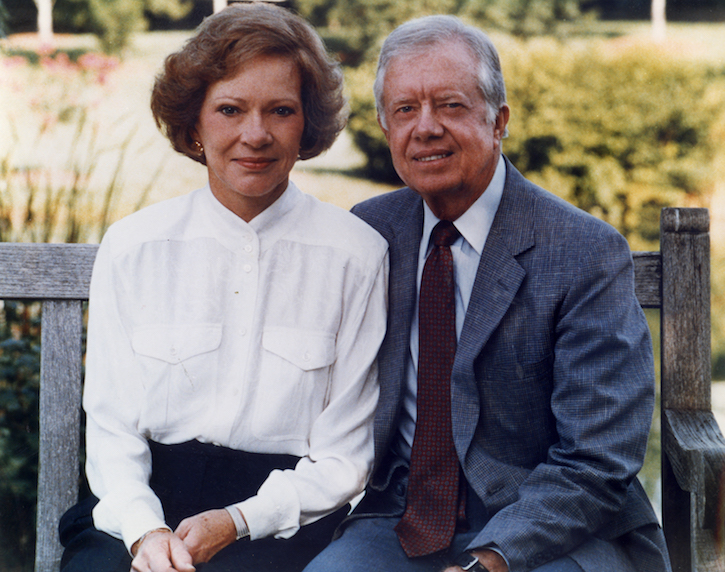 For nearly forty years, George Mason University’s School for Conflict Analysis and Resolution has been a leading figure in the field of peace and conflict studies. On July 1, 2020, it will start the next chapter in its leadership with the adoption of a new name: the Jimmy and Rosalynn Carter School for Peace and Conflict Resolution.

The name was approved on February 27, 2020, by George Mason University’s Board of Visitors. In September 2020, the School will host an event to commemorate this next step in its evolution.

The new name will serve as a tribute to the Carters’ steadfast commitment to the peaceful resolution of conflict worldwide, a transition made timely as the world faces both entrenched and emerging global threats and human security challenges.

“By becoming the Jimmy and Rosalynn Carter School for Peace and Conflict Resolution, we’ll be starting the next phase of our journey as an institution committed to furthering both the research and practice of conflict resolution,” said Alpaslan Özerdem, dean of the School. “In this effort, we will be taking the Carters’ unwavering dedication to peace as our beacon and our guide.”

The renaming will mark the latest stage in the School’s transformation from a center (1981–1989) and institute (1989–2012) to a school that has been recognized since 2012 as the largest degree-granting institution in the world dedicated to peace and conflict studies.

As the School’s research, practice, and impact on the field of peace and conflict studies have grown, the School has developed from the first institution in North America to grant a master’s degree in conflict resolution into the first conflict resolution department in the world that provides four degree-granting curricula at the bachelor’s, master’s, doctoral, and graduate and professional certificate levels.

Now, four decades after its founding, the School is set to mark a new chapter in the study and practice of peace and conflict resolution with its evolution into the Carter School.

The Carters’ legacy of peaceful conflict resolution and service

“I don’t think, today, everybody quite understands or appreciates the great work that President Carter had done,” said McAuliffe, who served on Carter’s re-election campaign following college.

“[The Carter School] will provide a fitting tribute to [the legacy of President and Mrs. Carter] in the field and ensure that future generations are equipped with the skills and training necessary to make similarly enduring contributions to peace,” Connolly wrote in a letter of support for the proposal.

Those contributions have included the work of President Carter and his administration on the Panama Canal Treaty, which restored the canal’s sovereignty to the nation and people of Panama, and the SALT II Treaty with the Soviet Union, which pursued the reduction of nuclear arms. The legacy of Jimmy and Rosalynn Carter also includes their post-presidency work on human rights, democracy, gender equality, and global health through the Carter Center, which is based in Atlanta, Georgia.

Perhaps the best known of President Carter’s contributions to peacemaking are the 1978 Camp David Accords, which paved the way for the development and signing of the 1979 Egypt–Israel Peace Treaty. The accords are often lauded as a demonstration of the invaluable impact that dialogue can have on addressing even intractable conflicts.

In 2002, President Carter was awarded the Nobel Peace Prize in recognition of his efforts to defuse international conflicts. During the Nobel Prize ceremony, he poignantly emphasized his belief that peace can only be achieved through nonviolent means.

“War may sometimes be a necessary evil. But no matter how necessary, it is always an evil, never a good. We will not learn how to live together in peace by killing each other’s children,” he said.

President Carter’s commitment to the transformative role of dialogue is shared by the School’s faculty, students, alumni, and supporters, who have been continually engaged in research and practice that support the evolution of different approaches to dialogue processes.

One such approach, the “Sustained Dialogue” process, was developed by the late Harold H. (“Hal”) Saunders, a dedicated supporter of the School who taught and mentored its students and contributed to its peacemaking research and practice.

As Assistant Secretary of State for Near East Affairs during President Carter’s administration, Saunders played a central role in the Camp David Accords. In a letter to the Carters in support of the School’s renaming proposal, Carol Saunders, Hal’s wife, wrote that he “often spoke…of how transformational his experience was” in supporting President Carter at Camp David.

She noted that the School’s commitment to serving as an institution for not just the study but also the practice of dialogue processes through its Point of View retreat and research center in Lorton, Virginia, is a key reason why the school is equipped to honor the Carters’ legacy.

Established by the School thanks to the generosity of two of the School’s earliest champions, Edwin and Helen Lynch, Point of View serves as a setting for reflective thinking, transformative conversation, dialogue, and peacebuilding. Its location on the site of the Lynch family’s home on the Potomac River, coupled with the School’s ability to convene some of the world’s most skilled conflict resolution practitioners through an alumni network of 2,000 and its reputation as the oldest graduate-degree granting institution in the field of conflict analysis and resolution, has caused many to consider Point of View to be a “civilian Camp David.”

Both Jimmy and Rosalynn Carter have dedicated their lives to peace. Their tireless efforts, which have included participation in citizen diplomacy initiatives and community-based service work with organizations like Habitat for Humanity, have always been grounded in their faith.

“The bond of our common humanity is stronger than the divisiveness of our fears and prejudices,” President Carter said during his Nobel Lecture. “God gives us the capacity for choice. We can choose to alleviate suffering. We can choose to work together for peace.”

The Carters’ belief in the transformative power of communities working together in the pursuit of peace is exemplified in their commitment to empowering and encouraging new generations of peacemakers.

In a 2016 interview with the Journal of Multicultural Counseling and Development, Rosalynn Carter underlined her belief in the impact that new generations can have on forging a better, more peaceful world.

“I tell young people that if they help someone else, they'll have a better life,” she said. “I also tell them that one of the most important times, I think, in their lives is when they get through college and through universities and through their schooling and go out into the world. They are as free as they’ll ever be.”

In its nearly forty-year history, the School has been similarly dedicated to empowering each new generation of peacemakers to resolve conflicts of all scales and types across the world. In carrying the Carter name, the School will continue its tradition of connecting students from around the world with the knowledge, networks, and opportunities they need to do the difficult, rewarding, and necessary work of peaceful conflict resolution.

As part of the renaming campaign, the School is seeking to empower both current and future peacemakers through securing a total of $10 million to support teaching, research, and practice. As part of this effort, the School has already raised $4.4 million, including a $2 million lead gift from Steve Cumbie and Drucie French, a couple based in the Washington, D.C. area who have been among the School’s earliest and longest supporters.

“Our intent with this gift is to advance the field of conflict resolution, by strengthening [the school] as an institution,” Cumbie said at the time of the donation. “The number of graduates the school has produced is impressive—but we need even more people to go into this field. Point of View is a great asset, as well, which should be fully developed.”

The funding the School is seeking will empower current and future peacemaking efforts by supporting the academic and professional development of students from across the world through increased scholarships; by enriching faculty production through robust research support; and by cultivating opportunities for peacemaking practice through the further development of the School’s “civilian Camp David” at Point of View.

These efforts will be aided by the School’s commitment to increasing outreach to individuals and institution across academia, the public sector, the private sector, and civil society that are working in the pursuit of peace.

George Mason University’s School for Conflict Analysis and Resolution, soon to be the Jimmy and Rosalynn Carter School for Peace and Conflict Resolution, is the world’s oldest and largest school for conflict analysis and resolution, and the only one that offers undergraduate through doctoral degrees. Its multidisciplinary faculty educates students from across the world in an innovative curriculum designed to prepare the next generation of peacemakers to develop whole-of-society solutions to conflict. Learn more at scar.gmu.edu.