Peacebuilding organizations help to transform demonstrations in D.C. from confrontations to coalitions 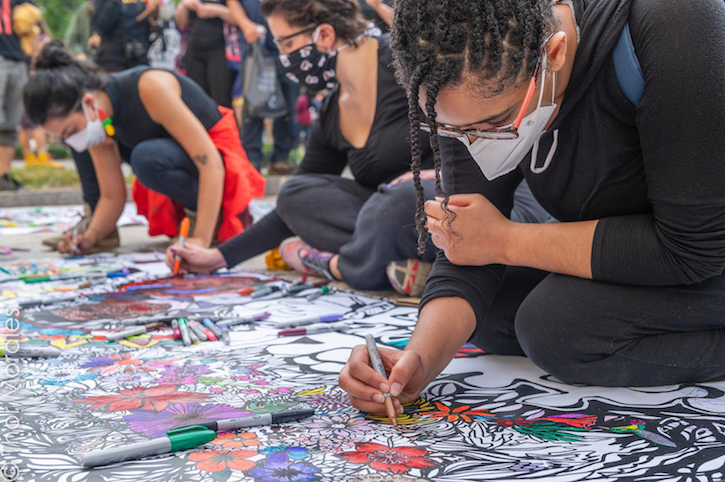 The Mary Hoch Center for Reconciliation at the Carter School was involved in organizing "peace activations" at Black Lives Matter Plaza in Washington, D.C., in June 2020. (Photo by Thor Morales)

What does it mean to take up space for peace? Monica Curca, an affiliate of the Mary Hoch Center for Reconciliation at George Mason University’s Jimmy and Rosalynn Carter School for Peace and Conflict Resolution, found herself mulling this question over during her participation in the Black Lives Matter protests in Washington, D.C., at the beginning of June.

As the interim director of +Peace and the founder of Activate Labs, Curca was at the forefront of efforts between nine D.C.-based peace organizations to create a model for what would become a series of “peace activations” within the broader protest movement taking place at Black Lives Matter Plaza.

Her efforts were supported by Elicia Yoffee, a master’s student at the Carter School and Project Manager with the Mary Hoch Center, and by Clara Debman, a D.C. artist and co-host of The Hive, a digital gathering space for peacebuilders and changemakers.

During one such peace activation in June , Curca stood on the outer edge of a drum circle. Around her, people were making and dancing to music, as well as painting and coloring posters, outlining the names “Breonna Taylor” and “George Floyd.”

It was the murder of Floyd that sparked the latest iteration of protests against police brutality, white supremacy, and anti-Black racism across the country. The movement has shone a spotlight on the disproportionate murders of, and violence against, Black people by police in the United States.

At the June peace activation in D.C., many onlookers seemed to be affected by the emotive expressions happening within the circle. Anyone present was invited to join and contribute. According to Curca, these kinds of collaborative and meaningful activations at the site of demonstrations can create space for participants to create community together to effect social change and confront racism in the United States.

We’re basically just taking up space for peace…When we talk about power, it’s all about the space that we hold, and we want people to represent the ideas and ideals that Black Lives Matter [and] that we can work together against racism.

The June peace activations were planned through a partnership between a variety of D.C.-based local and international peace organizations, including +Peace, Activate Labs, American Friends Service Committee, Alliance for Peacebuilding, Peace Direct, the Mary Hoch Center, Catharsis on the Mall, and Until Freedom DC.

According to the organizers, the idea behind the events was to create both a physical and communal space for peace and make room for creative expression to advance long-term and sustainable change, first through music, art, and poetry alongside protests, and then through future leadership trainings and dialogues. This theory of change posits that, as participants gather to fill the space with their constructive creativity, the mood in the broader demonstrations will be transformed in both a symbolic and literal way.

The intention of a peace activation is not to divert attention from the long-term objectives of the demonstrations. Instead, it is meant to help show how creativity and spaces for peace can transform spaces of confrontation into long-term collaboration for advancing social change.

Such creativity is cultivated through collaborative art-making. During one of the peace activations, event organizers brought two large vinyl banners, one reading “All Black Lives Matter All of the Time” and the other reading “George Floyd,” to display in front of the gathering. During the peace activation, participants could fill the designs in with color.

Roman Haferd, a restorative justice practitioner and community cultural organizer in Washington, D.C., had the idea of bringing drums, which he and BloomBars, a local youth-focused nonprofit, supplied for the subsequent drum circle.

While some elements of the peace activation were intentional, such as reserving a physical space on Black Lives Matter Plaza and collecting materials for participants, many of the significant moments and exchanges during the event happened spontaneously. One of these memorable moments took place during the drum circle, which became a bonding agent for the participants throughout the day.

“The drum circle always draws a crowd,” said Debman, describing the experience. “As the drummers played, a few brave souls entered the circle and began dancing. The onlookers went wild, and probably secretly wished that they had the courage to dance. Before long, the courage did come! The people were invited to think of dancing as a prayer. From that point forward, it wasn't just two or three or four in the circle...the circle disappeared, and the crowd began to dance!”

The event also provided an opportunity for peace-driven organizations and individuals to display solidarity with Black Lives Matter protestors and engage with their own role in the movement against systemic racism in the United States.

According to local peacebuilding practitioners, creating peace requires the participation and collaboration of as many people as possible, which was exemplified at the peace activations.

“There was an opportunity for so many different diverse views to be expressed in one place,” explained Elicia Yoffee.

Yoffee highlighted the importance of recognizing that there are many facets to the movement, and not everyone will agree on how change should be brought about. The peace activations, however, created a place where diverse views could creatively come together.

Through her work with the Mary Hoch Center for Reconciliation, Yoffee has led initiatives that engage local peacebuilding and social justice practitioners, leading the way forward for the Center to accompany and collaborate with key leaders and changemakers.

As protests continue and efforts towards much needed racial justice expand, the Mary Hoch Center remains committed to supporting emerging leaders in their efforts to advance racial justice in the United States.

“We are acutely aware of how much leadership skills are required in planning and seeing these changes through,” said the Center's director, Antti Pentikäinen. In particular, he said that the Mary Hoch Center intends to support local leaders in the Black Lives Matter movement to advance their long-term objectives, in part by sharing best practices from peacebuilding and systemic change efforts from across the world.

Such efforts require the kind of day-by-day, community-based initiatives that are unfolding across the United States, from Black Lives Matter Plaza to Portland, Oregon, to small towns and Main Streets that don’t make the front page. Their impact can be difficult to track, but back on Black Lives Matter Plaza, the peace activations may have offered a glimpse at change happening in real time.

“Hundreds of people were drawn through the different activities over the course of several hours,” said Debman as she reflected on the scene. “Some watched as others danced, some beat on drums and played musical instruments as others just listened. The peace activation, in essence, is a place to show up and belong with no expectations. In this space, everyone is welcome!”