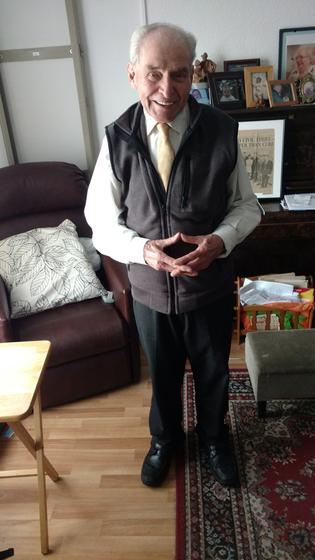 Students and faculty from the early days of the Center for Conflict Analysis and Resolution (CCAR), the center that later became the Carter School, will undoubtedly recall Joe Camplisson, who passed away in his native Belfast on Friday, July 9, 2021, at the age of 92. Joe was the very first of CCAR’s planned series of annual “Practitioners in Residence,” followed subsequently by scholar activist Helena Cobban and then by Ambassador John W. McDonald. They all brought practical experience of peacemaking to CCAR and introduced the realities of practical peacebuilding in a wide variety of settings to the campus world.

Joe was able to bring home to the CCAR community what it was like to be raised in a large Catholic family in a small house in a highly divided city. Joe grew up in part of a volatile province that could explode again into major violence and did so in 1968, at the start of the 30 yearlong “Troubles.”

Joe had originally left Catholic school (education in Northern Ireland was divided along sectarian lines) at the age of 14 and one of his early jobs was working in a butcher’s shop. By the mid-1960s he was working as a television repairman, travelling all over the city - and crossing sectarian lines as part of his work. This made him a familiar figure in many parts of Belfast. He and his family were also living in a house in a small Catholic enclave bordering a larger, mainly Protestant and Unionist district, so that when the sectarian violence began in 1968-9 and many living in mixed areas began fleeing to safer areas within their own religious community, Joe found himself and his family on the frontline of this process of “flight.” In this way, he started his career as intermediary, go-between, and bridge builder by setting up an information and tracing service, focused on who had fled from where, and who could therefore be found by concerned relatives and friends, who themselves were often displaced by bombings, burnings, or threats.

Subsequently, Joe was active in organizing grassroots meetings across the sectarian divide, usually involving members of the local clergy and community leaders, often hosted in a local synagogue, but often involving members of rival, paramilitary organizations - the Official IRA, the UDA, the Provisionals, and the UVF. He became a field officer for the newly formed Community Relations Commission (CRC) and in that capacity met John Burton who was acting as a consultant to the head of CRC, Maurice Hayes.

That established the first partnership between Joe and John Burton, working together as local, grassroots bridge builders. Much later, when Joe was on a visit to the United States, he ran into Bob Reid, then taking the new Master’s degree at CCAR at George Mason University, and the contact between the former television repairman and the former head of the Australian Department of External Affairs was renewed. For Burton, Joe was an obvious choice for the first CCAR “Practitioner in Residence,” and this was duly arranged by CCAR’s Director, Joe Scimecca, in Academic Year 1988-89. The link was thus established between Joe Camplisson, eventually working from FARSET in Northern Ireland, and CCAR, which later became ICAR in Virginia - a link which later involved Joe in carrying across some of Burton’s problem-solving ideas into other situations, most notably the conflict between Moldova and Transniestria in the former Soviet Union.

That, as they say, is another story. During his semester at CCAR, Joe had a major impact on a cohort of M.S. students and our first PhD class, while the Center at Mason made a lasting impression on Joe in his later work. The partnerships involved joint conflict resolution work with Jim Laue, Chris Mitchell, Susan Allen (MS ’95, PhD ’00), Kevin Avruch, Landon Hancock (PhD ’03), Tim Plum (MS ’16), and a number of ICAR students who undertook fieldwork in Northern Ireland over the next 20 years, many taking advantage of Joe’s local knowledge and contacts.

Joe always remained a staunch friend - and fan - of CCAR, ICAR, and later of S-CAR and the Carter School. But we might, in turn, best remember him as an ordinary bloke who turned out to be extraordinary in his ability to build bridges across daunting divides, to get people to listen to the other side, to understand the other’s pain and what caused it, and to look at, and into themselves as players in an often destructive game. Above all, he knew the people who lived, worked, and clashed at the real grassroots, because he was one of them. And, as Susan Allen said, “He had a big heart.”