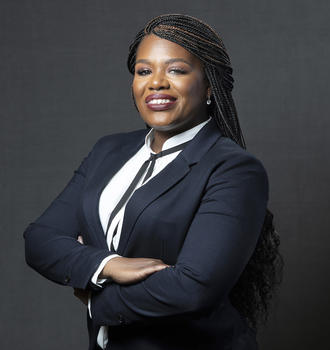 This summer, Congresswoman Cori Bush will be co-teaching a graduate-level course entitled, “The Public Pedagogy of Truth and Reparations.” Congresswoman Bush is a leadings voice for racial justice and human rights and the first Black woman to represent Missouri’s 1st Congressional District. Congresswoman Bush is a nurse, Black Lives Matter activist, ordained pastor, and former childcare worker. In this course, students will hear directly from Congresswoman Bush and activist, writer, and activist-scholar Dr. David Ragland about their national work building infrastructure and support for reparations and locally-led truth telling processes and commissions in the US. Representative Bush and Dr. Ragland will walk through their experiences during the Ferguson protests and beyond, and introduce the truth processes they helped create to center the voices of community members that have been impacted by racialized forms of violence.

This course will look at the creation of interrelated mechanisms: truth telling processes, participatory critical pedagogy and reparations as political and moral practices that can help address state sponsored violence against African Americans and other targeted groups while opening space for to imagine possibilities for greater racial justice in the United States and abroad. Students will meet other practitioners working on these issues from across the country and learn about cutting-edge practices being employed to address long running issues of structural violence and systemic racism. As a result, students will gain insight into the challenges and opportunities of building grassroots initiatives that support communities directly impacted by violence and gain greater fluency and competence in engaging larger policy debates and legislation at the Federal level.

This course builds on previous efforts at the Carter School to support truth-telling and healing work in response to police violence and other forms of racial injustice. In 2014, Congresswoman Bush co-founded the Truthtelling Project (TTP) along with Dr. Ragland following the murder of Michael Brown. At that time, Congresswoman Bush and Dr. Ragland collaborated with Carter School faculty member Arthur Romano and students at the school in developing resources for hosting Truthtelling events.The Truthtelling Project model led to over 60 events nationally that impacted thousands of people and advanced national conversations about the impacts of police violence on communities across the country and the power of communities to take the lead on seeking justice. The Truthtelling Project also review a MacArthur grant for their impactful work. This course provides an opportunity for another generation of Carter School students to better understand and consider their contribution to the work of truth, reparations and reconciliation.