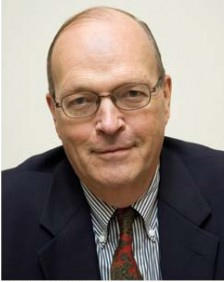 We at the Carter School were saddened to learn of the passing of our friend and colleague, Joseph V. Montville. Joe died peacefully surrounded by family, a well-deserved blessing.

Professor Emeritus Kevin Avruch has this to say about Joe:

Joe led a full and consequential life as a foreign service officer, educator, author, and committed activist in the service of peace. Among his many accomplishments, he is recognized as having termed the concept of Track Two diplomacy, giving a name to and thereby formally recognizing the contributions citizens – “non-professionals” -- could make in mitigating violence and working to achieve peace. He was a longtime supporter of the School for Conflict Analysis and Resolution and the Carter School when I was dean of S-CAR (2013-2019). As we worked to name the school in honor of Jimmy and Rosalynn Carter, Joe was my closest and most trusted advisor. He reached out to his own large network to engage the necessary support. Not a few of my letters and memoranda (in the inimitable style of the foreign service, but with a lot more “heart” than one would find in a diplomatic cable) were first drafted by Joe. He believed deeply in what became the Carter School and its mission. Joe was a loving, generous, and empathetic man.

Professor Richard Rubenstein elaborates further on the intellectual foundations of Joe’s work and his pioneering practices of diplomacy:

Joe Montville had many talents and interests in the field of conflict resolution, but his great passion was to develop an understanding of the methods by which religion might become a source of sustainable peace.  During the time that I was writing and teaching about conflict and religion, Joe often lectured in my classes or appeared in symposia that I organized.  He had a broad understanding of religion both in terms of its more orthodox institutional expressions and as a key element in the “civil religion” that often determines how groups relate to each either cooperatively or with hostility.  He also was in close contact with religious leaders in the U.S. abroad whom he thought should work with each other towards the goal of positive peace.

An outstanding illustration of this was Joe’s key role in bringing Mohammad Khatami, the former president of Iran, to give a lecture at National Cathedral.  The trip was almost called off half a dozen times because of its political sensitivity at a time of continuing hostility between the US and Iran.  I was present on January 6, 2006, when Khatami stood in the pulpit and declared (as Washington Post reporter Robin Wright reported) that “the United States is a ‘great’ country ‘with great people, great capacities, and potential’ -- language that stood in stark contrast to more than a quarter-century of Iran calling the United States ‘the Great Satan.’”

Wright’s article continued: “But he also condemned its unilateral foreign policy, and he cautioned at a news conference before last night's speech that Washington would be more effective if it worked alongside other nations.”

The second strong connection I had with Joe related to his deep friendship with Dr. Vamik Volkan, whose work he consistently advocated and publicized for years.  He supported Volkan’s Center for Mind and Human Interaction at the University of Virginia and connected him with government officials to further his own practice in places like the Baltic nations.  This made Joe more than the usual “social psychologist” – it allied him with an outstanding depth psychologist whose work deepened his understanding of the relationship of violent political conflicts to deep mental processes.

The person at the Carter School who knew Joe best, and whose relationship to Joe through the School’s Center for World Religions, Diplomacy and Conflict Resolution, was the longest, is Professor Marc Gopin. Marc reflects on Joe in the following words:

There were key events in Joe’s life that led him to his pioneering and most lasting contribution to world peace and conflict resolution theory. The first was his profound reaction, along with key friends that he had made across the world, to the paralyzing standoff between the United States and the Soviet Union. It was then that they swung into action in 1980 with behind-the-scenes unofficial diplomacy at a far deeper level of relationship between select Americans and Soviets who were in a better position to communicate and build trust.

Joe realized then that practitioners of peacemaking and their unofficial diplomacy were essential to the future of the world. But he knew that he needed to spend a lifetime building the theories as to why and how those relationships could make a difference. Joe would spend the rest of his career supporting, in highly innovative and strategic ways, any and all institutions and practitioners who deepened the work of Track Two unofficial diplomacy.

The second seminal moment that led to a lifetime dedication to Track Two diplomacy was when he himself witnessed the terrible limits of official diplomacy during the Iran/Iraq war. He bore witness to the moral compromises and human rights violations that come with nations making despicable friends against common enemies, instead of healing the roots of conflict. These were stunning moments of revelation for Joe. Joe courageously struck out on his own after ending his official diplomatic work. He singlehandedly built a community of Washington and global influentials to embrace alternative forms of diplomacy. Thus, he continued his work at Esalen in California with his colleagues there, but he also embraced several other tributaries of research and practice that fed into Track Two Diplomacy. He championed research into the psychodynamics of conflict, into the wounds of war and incomplete mourning. He called for the need to innovate healing at a deep level that must accompany peace processes and peace treaties.

Joe built and expanded conflict resolution theory and practice by highlighting the important work of many others. He did this selflessly and generously, placing many other careers above his own when the needs of the world outweighed his own needs as he saw it. He also pioneered the field of memory and history as critical to conflict analysis. Influenced by positive psychology and other luminaries such as Elise Boulding, Joe promoted positive memories of shared civilizations versus the obsessive traditional emphasis on warring civilizations. He did this, for example, through promoting shared memories of the Golden Age of Moorish Spain and its unparalleled examples of Abrahamic family coexistence, a favorite theme of his decades-long writing and practice.

Finally, this direction of research and practice evolved into an intellectual embrace of the central importance of religion and religious actors for the future of inclusive peacebuilding and diplomacy. He did so decades before K street and everyone else scrambled to understand religion and violence after 9/11, which in reality was not a serious interest in religion but a thinly veiled fear of Islam. Joe by contrast embraced all religions in their capacity to promote peace and daringly established beachheads of research and practice right on K Street at CSIS, and at George Mason University’s then Institute for Conflict Analysis and Resolution. Joe was singularly responsible for the writing and publication of every Oxford book on religion and peacebuilding that established a new field of religion and peacebuilding. Naturally he became chair of the board of the Center for World Religions, Diplomacy and Conflict Resolution in 2003 from its inception, a Center that still exists today at the Carter School.

None of these initiatives would have secured platforms for research and practice  without the quiet, selfless, visionary and generous helping hand of Joe Montville. He gave and gave for what he believed to be the single most important path to global peace. His students and colleagues have gone on to assert the vital importance to lasting peace of including numerous stakeholders in every corner of the globe who would never have been included in official diplomacy. The United States Department of State, his former employer, established entire departments that began to invest in programming for religion and peacebuilding and the inclusion of many stakeholders in peacebuilding. It is difficult as I look back to imagine any of these important innovations coming about without Joe’s dogged determination and quiet hand behind the scenes.

Joe claimed to have been not religious personally, and yet the zeal with which he pursued world peace, his dogged determination, and his tireless optimism combined with savvy strategy, all spoke to Joe Montville being a man on a mission – a man of vision, hope, and abiding faith in the future of humanity.