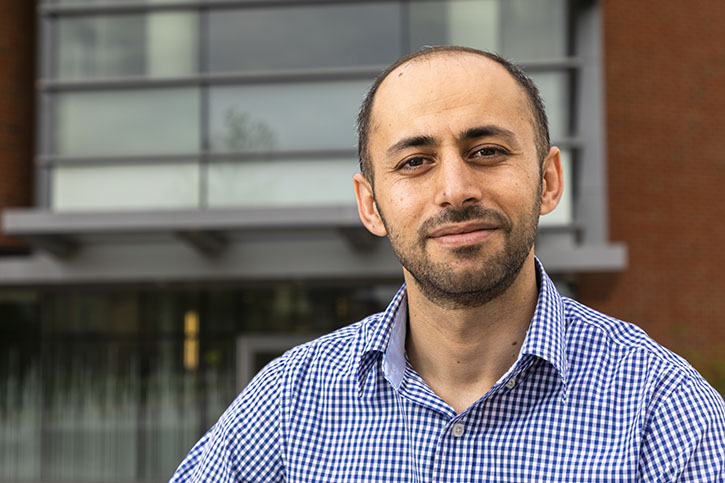 For about 25 years, Khairi Shammo said it felt like he and his family from Sinjar, Iraq, were “running from a conflict to a conflict.”

They moved back and forth from Iraq to Syria multiple times trying to avoid the Iraq-Iranian war, terrorism and religious discrimination for being Yazidis, members of a religious minority.

They wanted a life free from conflict. So Shammo, a senior at George Mason University’s School for Conflict Analysis and Resolution (S-CAR), traveled with four of his siblings to Virginia in 2010. A few setbacks in getting documents approved caused Shammo’s parents and two others siblings to remain overseas.

What happened next was unimaginable, Shammo said, but it led him to Mason and changed the course of his life.

On August 3, 2014, ISIS rampaged the village where Shammo’s family resided.

“It was crazy for us [in America] not knowing what’s going on and seeing on social media ISIS beheading, shooting and [trafficking] people,” Shammo said. “We were scared.”

About 12 hours later, Shammo got a call from his dad—they were safe, but the situation had left thousands of Yazidis in danger and stranded without basic necessities.

Shammo’s family, along with their Yazidi friends in the area, knew they had to take action.

“The first thing we did was call the State Department,” Shammo said. A day later they were meeting with U.S. officials, providing intel on the situation.

“The United States decided to drop items like food, water, and baby formula for the people stranded on top of Mount Sinjar,” Shammo said. “With a very small group here, we did have an impact.”

Shammo hopes he can continue that impact moving forward.

“What happened to the Yazidis was a key component for me to change my major to conflict analysis and resolution,” said Shammo, who had started a degree in finance overseas. “I’m hoping in the future to do something to bring peace and stability to that whole region.”

After the tragedy with ISIS, Shammo worked with Kurdish Human Rights Watch to assist refugees resettle in America.

“It was rewarding for me, coming from a refugee background,” Shammo said. “I felt like I was doing something.”

Shammo wanted to continue helping others on a larger scale, so he enrolled at S-CAR in 2018. It was his first and only choice, he said, due to the school’s reputation as a leader in the conflict resolution field.

Being at S-CAR has lived up to his expectations, he said.

“The experience the professors bring in is amazing,” Shammo said. He said he also enjoys how students contribute to the learning experience.

“Many of our students come, as [Shammo] does, from zones of violent conflict, and it is quite amazing to see how well they are able to handle the difficult legacy of violence,” said Richard Rubenstein, one of the professors Shammo said inspired him.

“[Shammo] has become a very good conflict analyst and will someday become a real force for peace in the world.”