On the morning of Wednesday, October 26th, George Mason University professor Suzanne C. de Janasz conducted her first-ever negotiations workshop for female high school students at McLean High School in Northern Virginia. An enthusiastic audience of about 100 young women came to hear de Janasz explain why negotiation is important for women of all ages and walks of life, and how to build negotiating skills for the future.

De Janasz, an organizational researcher who holds a joint appointment in the School of Business and the Carter School for Peace and Conflict Resolution, says there is a pervasive cultural bias against women who ask for what they deserve. The negative labelling begins in childhood, with terms such as “bossy” being applied to more assertive girls.

As she writes in a recent post for AACSB Insights, “Equality-minded negotiations professors can enable women to overcome this gap…by engaging younger age groups. If we introduced core negotiations concepts and skills to high school students, they would hopefully be seasoned and poised self-advocates once their careers began in earnest.”

To that end, de Janasz’s McLean High School workshop, which was organized by the student body’s Girls’ Leadership Group, touched upon the obstacles women negotiators face but mainly offered advice on getting around them. She detailed how the strengths commonly associated with women—asking, involving, seeking participation and consensus—can be leveraged for positive results in negotiations and interpersonal conflicts.

A good negotiator, de Janasz explained, is well-equipped to turn gender-biased situations into fairer ones. She called on the students to recognize incidents of bias or unfairness as opportunities to negotiate better outcomes rather than as fixed and final. She also suggested that the girls look out for each other, amplifying other girls’ voices or inputs (that are more often ignored than those of boys), and introducing their accomplishments or expertise, which girls frequently find it hard to do for themselves. This sets the model for others to follow and invites reciprocity.

For example, she asked the McLean students what they would do if they discovered they were being underpaid for a babysitting job. One of the students countered this hypothetical scenario with one from her own life, in which the couple for whom she was babysitting neglected to pay her for her services. The student let the apparent oversight pass without comment, for fear that the couple would think she was too demanding and not call her again.

For de Janasz, the student’s story perfectly illustrates why the workshop was necessary. “As women, we often face an opposition between being seen as a nice person and getting what we deserve. I want to teach young women strategies for negotiating that, which they can carry throughout life,” she says. 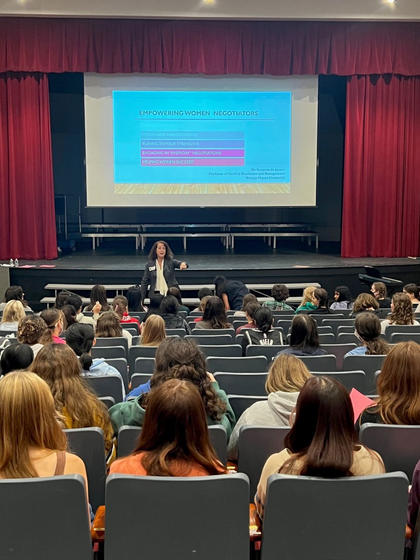 Toward the end of the workshop, students paired off for a simulated negotiations exercise. One played a student wanting to hold a potentially divisive fundraising event at their school; the other acted the role of the principal, wary of the pushback from parents and administrative headaches such an event might cause.

The workshop was well-received by the student attendees, as well as McLean High School principal Ellen Reilly. McLean sophomore Maymuunah Little says, “I found your workshop to be helpful and informative. I have been slowly implementing the negotiation skills and tactics you taught me in my daily life. And this upcoming week, I plan to use them in my very first job interview!”

De Janasz says she hopes this is only the beginning of a much broader initiative. “My hope is that we use this event as a springboard for other events like this in the community, state and nation,” she says.

Suzanne C. de Janasz is the author of Interpersonal Skills in Organizations and Negotiation and Dispute Resolution, among other books. She is available for comment, as is Principal Reilly and the co-presidents of the Girls’ Leadership Group at McLean High School.